SPARTANBURG – The Spartanburg Vikings scored 38 unanswered points in the first half to rally over the Nation Ford Falcons grabbing a 59-17 win in the first round of the 5A state football playoffs.

The Falcons made the 90-minute trip to the three-year old, $168 million Spartanburg High campus for the first round as the Vikings came into the game with a 6-4 record. With the loss, the Falcons finished the season at 4-7.

This was the third meeting between the two teams, with each winning a game in the series. The game was the Falcons 14th playoff game in school history as they came in with a 5-8 playoff record.

Nation Ford also came in without the services of Jeremiah Hailstock who was wearing a boot on his left foot, putting a cramp in the Falcons offensive plans and allowing them to rely only on running back AJ McCullum and quarterback Carson Black. Under center, Black went 17-for-32 passing with 164 yards, two interceptions and two touchdowns. McCullum rushed for 55 yards on 16 carries. Leading receiver for Nation Ford was Josh Ameo with six catches for 81 yards and a touchdown.

Four turnovers for the Falcons really hurt them in the first half, as the Vikings took advantage scoring on two of the turnovers.

“We shot ourselves in the foot,” said Nation Ford head coach Michael Allen. “We killed our own energy. You can’t turn the ball over four times in the first half. But I am really proud of the fight in our kids. They never gave up.”

Nation Ford continued to fight getting a Vikings turnover which gave them the ball in good field position. Black hit Ameo on an 18-yard touchdown pass with about 3:20 left in the quarter after a four play, 32-yard drive to make it 45-17.

After a good start in the first quarter, Black struggled in the second quarter with two interceptions and went just 3-for-12 passing in the quarter.

Nation Ford turned the ball over on their first drive in the second quarter as Black was picked off by Jayden Brown who returned it 42-yards for a touchdown to extend the Spartanburg lead to 17-9 with 10:30 left in the quarter.

Black tossed his second interception returned for a touchdown in the quarter, this time on a 30-yard return off a tipped pass continued to extend the Vikings lead at 31-9 with about 5:21 left in the half.

The Falcons did get a small break with Ja’Derrick Foster getting an interception at the Vikings 41-yard line with about two minutes left in the half. However, Nation Ford couldn’t make things happen and turned the ball over on downs.

Spartanburg made the most of every second in the first half scoring as time expired with a 36-yard touchdown reception from Que Moore to put the Vikings up 38-9 at the break.

Black came out in the first quarter like a man possessed completing his first five passes he threw for 71 yards.

Nation Ford fumbled on its first series, but nothing came of it as Spartanburg couldn’t capitalize on the opportunity.

The Falcons were able to make things happen on their second series pushing it to the red zone, but a penalty forced them to settle for a 26-yard field goal by Reed Richardson.

The Nation Ford defense was able to make a big stop and turnover on downs giving the ball back to the Falcons at the 26-yard line. Black was able to hit Ameo to move the ball inside the five-yard line, where Black would find Ben Wakefield on the next play for a 3-yard touchdown to put the Falcons up 9-0 with about four minutes left in the opening quarter.

Spartanburg came back to score on a long drive settling for a 36-yard field goal to get on the board. However, Nation Ford fumbled for their second time of the opening quarter getting the ball back at the 28-yard line of the Falcons.

The Vikings then scored two plays later to take a 10-9 lead with just four seconds left. 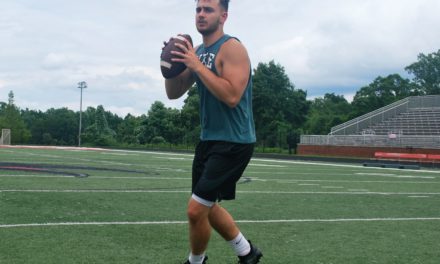 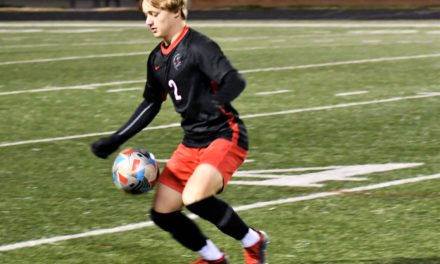