Catawba Ridge advances to second round of playoffs with big win

Head coach Zac Lendyak said his Catawba Ridge High football team learned a valuable lesson Friday night on what – and what not – to do when closing out an explosive team in a high-pressure playoff situation.

Despite missing leading running back Tyler Jones (concussion protocol), Catawba Ridge’s relentless and multi-pronged rush attack totaled more than 460 yards and accounted for six of the Copperheads’ nine touchdowns in a lopsided 63-28 rout of visiting Riverside High School in Friday night’s first-round playoff game at The Pit in Fort Mill.

Catawba Ridge improved to 10-1 and will travel to play North Augusta in next Friday’s second-round matchup. The game is set to kick off at 7:30 p.m. in North Augusta.

“We’re super proud of them,” Lendyak said. “It’s tough to win a playoff game in the state of South Carolina. This was the class that’s come through all four years at Catawba Ridge, and this game was for the kids like Tyler and Brody and those who were out tonight.”

The Copperheads were missing five starters for Friday’s matchup, according to Lendyak, including Jones, tight end/receiver Brody Tesimale (knee) and offensive lineman Marshall Roof (leg). But Lendyak’s backups proved well-equipped to step up and shoulder the load.

“We’ve got playmakers,” Mister said. “Whether it’s run, pass, it doesn’t matter. Other teams look at film and think, ‘All they do is run,’ but we’ve got so many playmakers on this team.”

Riverside entered the playoffs as a No. 3 seed out of Region 2. The Warriors were led by quarterback Rob Sanders and receiver duo Cayden Cosby and Zion Culbertson.

Riverside trailed by as much as 42-7 just before halftime, but cut the lead to 49-28 early in the fourth quarter. But Fikis’ final rushing touchdown and Jackson Burger’s 45-yard scoop-and-score fumble recovery touchdown in the fourth quarter was too much for the Warriors to answer, and they ended their season with an overall record of 4-7.

Catawba Ridge broke out to a commanding early lead and rarely looked back, scoring touchdowns on each of its first-half possessions.

Fikis and Mister dominated early on the ground to drive 63 yards on their opening two-and-a-half-minute drive, which allowed Fikis to find Bady Ambrose over the middle for an easy 3-yard catch on second and goal.

Fikis was the focal point just a few minutes later when he found receiver Miles Baucom for a 15-yard pass, then broke out on a 40-yard QB sneak down the outside, pushing a defender out of his way on the trip to the end zone to give Catawba Ridge a 14-0 lead late in the first quarter.

Riverside was able to drive downfield to some extent, but the Warriors were unable to finish at crucial junctures. Sanders missed two open receivers in the red zone on the ensuing Riverside possession heading into the second quarter before kicker Joshua Clarke missed a 30-yard field goal.

Catawba Ridge’s multi-pronged attack showed little mercy. Mister opened the next Catawba Ridge possession with an 80-yard house call that put the Copperheads up 21-0 and left a few Warriors defenders in the dust.

Riverside finally got on the board when Sanders found Mikkel Sinner from 9-yards out to cut the lead to 21-7 with 7:25 left in the half.

But the home team was unfazed. Williamson’s strong kickoff return set the Copperheads up on the Riverside 44, and Hamilton converted on his 25-yard rush up the middle, where no Warriors defender could touch him to push the Catawba Ridge lead to 28-7.

Catawba Ridge’s devastating rushing attack continued to run downhill. Mister ripped off a 41-yard rush to set Catawba Ridge up on the opposing 4-yard line, where Gilliam finished off the short 6-play drive to make it 35-7.

After another Riverside 3-and-out, Fikis found Braylen Burgis for a 17-yard catch, then spotted Williamson streaking unmatched through the middle for a 39-yard score to make it 42-7 with 17.6 seconds left in the half.

“It was a great job with Evan, with Ira, with Jordan,” Lendyak said. “And then you’ve got Tyler Fikis, who’s so dangerous. It’s tough to pick your poison, it can be tough to stop that. Credit to the offensive line for making those holes.”

Riverside pulled a rabbit out of its hat on the final drive of the half.

Taking over on its own 20, Sanders found Culbertson for 42 yards, then Owen Lundin to push the Warriors into the Catawba Ridge 30. Sanders then connected with a wide-open Cosby for a 27-yard score as time expired to cut the lead to 42-14.

Lendyak said his team came out a little too flat after the halftime break, allowing Riverside to grab a foothold.

“The thing we’re trying to tell them is you can’t let the situation dictate how you play the game,” he said. “We were up really big at halftime, and I think you could tell in the third quarter, they may have thought ‘Well, we don’t have to come out as much.’ We were up big last week (in a loss to Northwestern), and we gave it up. As head coach, these are the things that we can work on.”

Fikis picked up his second rushing score of the night when he scored from 12 yards out on Catawba Ridge’s first drive of the second half.

Riverside answered on the next drive through Zachary Beasley’s 8-yard run that capped off an 8-play, 74-yard drive that included Skinner’s 47-yard rush.

And the Warriors cut the lead to 21 when Sanders found Culbertson over the top from about 40 yards out on the second play of the fourth quarter. But the outcome was settled when Fikis called his own number and picked up his third rushing touchdown, this time from 37 yards out.

On the next Riverside play, the Catawba Ridge defense sacked Sanders, causing a fumble, and Jackson Burger was the first one to scoop up the ball and rumble 45 yards back to the other end zone.

Lendyak said he was proud of his team, including Baucom, who had to start in defense for the first time this season.

“If you can rush for over 400 yards, you’ve probably got a pretty good chance of winning,” Lendyak said. “To do that without our starting running back, that was impressive. We probably had more kids playing tonight and playing in new positions than ever before.” 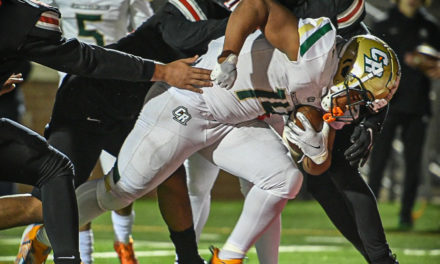 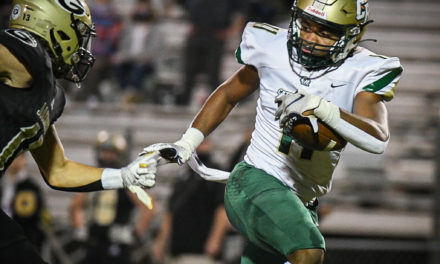 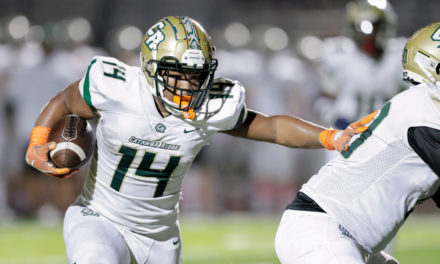 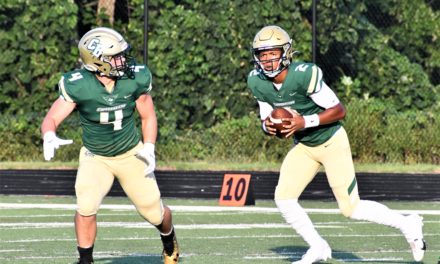 Stacked with talent, Copperheads look to make another run