BLYTHEWOOD – It wasn’t the easiest of nights, but the Nation Ford Falcons was able to take two of three matches on the road in Blythewood Wednesday.

The Falcons beat Spring Valley 38-24 and Dutch Fork 37-36, but fell to the host Blythewood High 57-21 in a quad-dual. Nation Ford is now 4-3 on the season. Getting the two wins was pretty impressive considering the Falcons were without five weight classes in the duals.

“We had three starters sitting in the bleachers for health reasons,” said Nation Ford head coach Tony Forte. “We are missing some guys but I will take it. We had some young guys wrestle hard. The guys did what they had to do.”

Nation Ford started the quad-dual with Spring Valley, who also had holes in their lineup as well.  The Falcons jumped out to an early lead and used the matches they did have to go up early as they never trailed.

Against Blythewood, those holes in the lineup hurt as Nation Ford won the first two matches, but then lost five straight, two by forfeit to go down 30-9. Winning early for Nation Ford was Gilstorf (113) and Nguyen (120), before Brandenburg got a forfeit win at 160-pounds.

After the Brandenburg win, the Falcons dropped three more matches, two by forfeit before Rygol won with a first period pin.

The Dutch Fork match was just as interesting as forfeits again played a big part. Because of those forfeits, the two teams traded the lead on three occasions before ending the match tied at 36-36. Nation Ford would get the win on criteria of having the most matches where they scored the first point in the match.

Nation Ford started the match with Nguyen (120) picking up a first period pin and Ladamus (126) getting a forfeit win to put the Falcons up 12-0. Dutch Fork would then come back to take a 24-12 lead winning two matches by pin and two by forfeit. Brandenburg (160) picked up his third win of the evening with a pin to cut into the lead, and Michael Kay (182) would also pick up a forfeit win to make it 30-24. Rygol (220) would get a first period pin to tie the match and then after a loss at heavyweight by Savyion Drayton Gilstorf (113) would get the match tying forfeit to make it 36-36.

Up next for Nation Ford is an individual tournament at Mallard Creek this weekend, before coming back home next week in a tri-dual against Chapin and South Pointe. 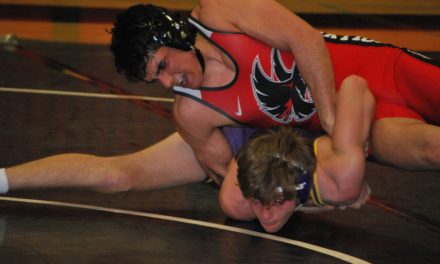 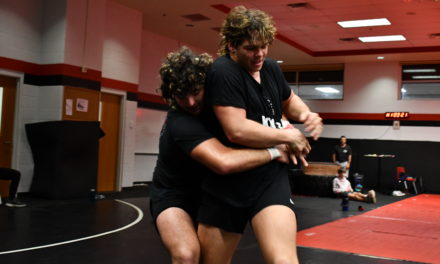