Nation Ford basketball came away with a split versus Blythewood Friday night, with the girls winning late and the boys losing by double-digits.

The Nation Ford coach was trying to get his players going and it worked. The Falcons fought back in the fourth quarter to win 55-48.

It’s the first win for Nation Ford in region play, improving its record to 10-7 overall and 1-1 in Region 3-5A.

“We are a very confident team, but we are young, so the confidence comes and goes,” Bennett said. “During a timeout, I just had to remind them, enough is enough. Let’s play our game. Let’s get focused.”

After leading by a game-high 10 points, the Falcons saw their lead shrink, even trailing at multiple points in the second half. The catalyst for the change in play was bad passes and shots as well as sending the Bengals to the foul line.

But when the Falcons needed points, Camille Kerridge was there to save the day. She rattled off six points in the fourth quarter to give her team some much-needed momentum. She nearly played the entire game and finished with a team-high 16 points.

Bennett pointed out that Kerridge’s play was crucial down the stretch. He said he is proud of her for taking on a leadership role as a sophomore.

“Everybody knows about Camille, but she’s also a great teammate,” he said. “So, I challenged her to get her teammates involved and continue to prepare them and get them ready to go.”

It was a good night all around for the Falcons. Aubrey Barney finished with eight points, hitting two three-point shots, while Kayla Wilmore also had eight points.

There’s a good reason why games aren’t decided until the final buzzer sounds, and Blythewood proved that Friday night.

After Nation Ford, falling to 7-11 overall, came out firing on all cylinders in the first quarter, the Bengals were in control the rest of the way, winning 74-57.

In the opening quarter, the Falcons owned a double-digit lead at one point. However, a 24-point second quarter from Blythewood changed everything.

“They came out in that zone and once they switched their defenses up, I thought everybody might not have been ready to play at that point in the game,” said Nation Ford head coach Charles Brown. “I thought they gained a little bit of confidence to build, and we lost offensively. We didn’t have a good shooting game.”

It was a rough game for the Falcons’ offense after the early scoring outburst. They had trouble sinking shots while Blythewood made them pay for their misses. Nation Ford combined for 21 points in the second and third quarter.

After racking up 10 points in the first half, Sheldon Joseph went scoreless the rest of the way. The same could be said for JJ Rembert and Nick Chuttey, who were held to eight and five points, respectively. Rembert fouled out early in the third quarter, putting an exclamation point on the team’s struggles.

“It was a combination of us not having a good shooting game and us not handling the pressure very well,” Brown said.

Moving forward, Nation Ford will still be searching for the elusive first region win of the year.

Its next opportunity to do so will come against Rock Hill at home next Tuesday. The girls will tip-off at 6:30 p.m. followed by the boys at 8 p.m. Despite loss, Nation Ford girls scrapping for a playoff spot 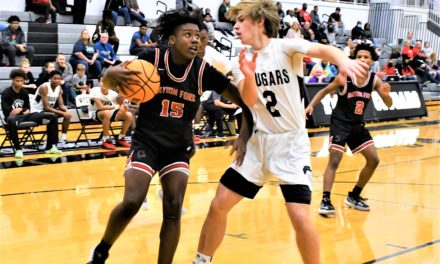 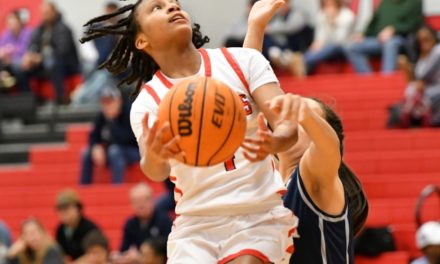