As one of the first athletic commitments from Catawba Ridge High School, rising junior Harrison Wilson won’t be going far.

Wilson, 16, verbally committed to play baseball for the Winthrop Eagles. Wilson can’t officially sign for some time, but said he wasn’t going to pass up the offer.

“It is close to home and I have been interested in them since I was 13 or 14-years-old,” he said.

Wilson also had an offer from USC-Upstate, but said he liked what he saw at Winthrop.

“My hitting coach said, ‘if you have the right choice and circumstance, just take it,” Wilson said. “I felt like it was the place for me.”

Wilson’s personal hitting coach is former Major League Baseball All-Star Tony Womack. Womack won a World Series with the Arizona Diamondbacks in 2001 and played in the majors for 13 years.

Once a two-sport athlete, Wilson played football his sophomore year and was part of the inaugural varsity football team at Catawba Ridge. He split time at quarterback and also played on the defensive side of the ball for the Copperheads. However, his time on the gridiron is over as he has decided to concentrate on baseball and won’t be playing football in the upcoming year.

“I felt like baseball is what my future is in,” he said.

Wilson, who has been playing baseball since he was 3-years-old, plays shortstop and pitched for Catawba Ridge in their first baseball season at the school. He recorded the baseball program’s first ever no-hitter during the season against Fairfield Central. His sophomore season on the diamond was cut short due to the cancellation of sports because of the coronavirus.

At Winthrop he will be playing the middle infield, but is versatile as a utility player.

“I can really play anywhere,” he said. 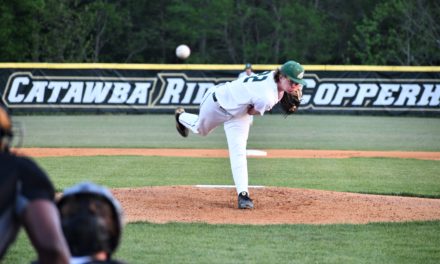