Nation Ford comes out of the tournament at 7-13 on the season after picking up wins against Eastside and the Miller School of Albemarle. The Falcons lost to Gray Collegiate and host AC Flora during the tournament.

The Falcons opened the tournament falling 7-5 to Gray Collegiate Monday. The back-and-forth competitive game saw Gray score two runs in the top of the seventh to break a tie. The two teams combined for six errors in the game with each team making three errors. Nation Ford had five hits in the game and used four pitchers in the loss.

Day two of the tournament Tuesday was better for them as it saw them pick up a 5-3 win over Eastside. Nation Ford jumped out to a 5-0 lead and held off a rally from Eastside.  Gabe Simmons went 3-4 in the game with an RBI to lead the Falcons at the plate. Paul Solari went six innings allowing three runs on six hits while striking out four and walking three in picking up the win.

Day three of the tournament was even better as Nation Ford beat the Miller School of Albemarle 10-3. The school is based out of Charlottesville, Va. The Falcons played well scattering 10 hits and jumped out early to a 7-0 lead by the fourth inning. Simmons again led the way going 2-4, but Jacob Petit, Drew Brink and Luke Miller each drove in two runs in the game. Lane Ross got the win going three innings and allowing one hit while striking out one and walking two, as the Falcons used four pitchers in the game.

In the final day of the tournament Thursday, Nation Ford fell 2-1 to AC Flora in five innings because of a time-shortened game. AC Flora won on a walk-off in the bottom of the fifth inning. Nation Ford had just four hits with Solari going 2-2 and Seth Hanson going 1-2 with the only RBI of the game. Hanson also went four and a third innings allowing five hits and two runs while walking two and striking out three in the game.

Nation Ford takes a brief break from Region 3-5A play next week as they play rivals Catawba Ridge in two games and then travel to Charlotte Catholic in between the games against the Copperheads. The Falcons will resume region play with a critical three game series against Boiling Springs to end the regular season. 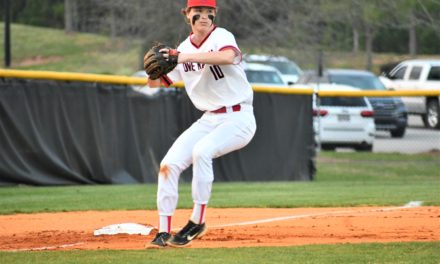