The Nation Ford Falcons boys’ lacrosse team didn’t give themselves any cupcake teams to open the 2022 season with.

Nation Ford opened the season earlier in the week against Catawba Ridge winning 11-3 and then came back Thursday evening to face a strong Fort Mill team as they were able to hold on for a 9-6 win over their oldest rivals.

The win meant a little more for Nation Ford as it was Fort Mill that knocked them out of the playoffs last season.

“There was a little extra fire there,” said Nation Ford head coach Cory Turner. “Fort Mill is a good team.”

Nation Ford improves to 2-0 on the season, while the loss was the season opener for Fort Mill.

The game was a defensive struggle as the two teams combined for just 15 goals. Nation Ford was led by Hunter Nickola, Luke Letterhos, Tyler DeMarco, who all scored two goals in the game. Fort Mill was led by Danny Anderson, who also scored twice.

Nation Ford opened the game up scoring about two minutes into the first quarter on a Luke Letterhos strike. Fort Mill came right back three minutes later to tie the game as Lawson Ross broke the shutout for the Jackets.

From there the Falcons opened the game up and gave themselves some breathing room scoring the next three goals to go up 4-1 with DeMarco scoring twice and Ashton Tauzin adding his lone goal in the game. Fort Mill did get one goal from Jake Axton before the end of the first quarter with about two minutes left in the period to make the score 4-2.

In the second quarter, Nation Ford again scored three more goals to take a comfortable 7-2 lead to the locker room. Letterhos, Nickola and Will Alvarado all scored second quarter goals for the Falcons.

Fort Mill rallied in the third quarter scoring two goals as Ben Riemann and Trent Farley made a game of it for the Jackets as they closed the gap to 7-4. Fort Mill opened up the fourth quarter as Anderson scored the first of his two goals to make it 7-5 and allow the Jackets to get as close as they would in the game.

After pulling within two goals, Nation Ford would again widen the gap scoring two goals to make it 9-5 as Josh Ameo and Nickola would add goals for the Falcons. Anderson did add a final goal of the game for Fort Mill scoring with about seven seconds left.

Turner said he feels like Nation Ford can do well this year, but the key is staying healthy.

“I think we will be alright if we stay healthy,” he said.

Up next for Nation Ford is a match at TL Hanna Saturday and for Fort Mill is a game Saturday at Providence Day.

The Catawba Ridge girls’ lacrosse team fell in overtime 9-8 to River Bluff in their season opener and the boys’ lacrosse team picked up their first win of the year 6-5 over Mountain Island.

The Catawba Ridge girls’ soccer team opened the Viking Cup in Spring Valley with a 4-0 win over Greenville. Kyleen Bents, Nora Pampreen, Kylie Manha and Sadie Commerford all scored goals for the Copperheads. 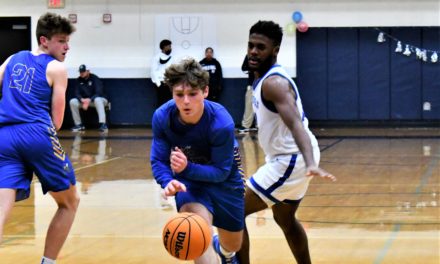 Clover edges Fort Mill to give them first region loss Jackets sweep Clover on the track