The Fort Mill softball team moved on to the Upper State playoff bracket by beating Woodmont 5-1 to win the District III championship.

For the Jackets it was the fifth consecutive District title minus the 2020 COVID year where the season was canceled. Fort Mill again used key hitting, which head coach Chuck Stegall said they still need to improve on, and another solid performance by pitcher Maddie Drerup to get the win.

Drerup pitched a complete game allowing just one run on four hits while striking out eight and walking one. She also went 1-2 at the plate with three RBI.

Fort Mill, which improved to 14-5 overall, wasted no time getting on the board in the bottom of the first scoring a run as Brynn Bartolini singled to start things off for the Jackets. Trista Reid would then drive in Bartolini on a line drive single to plate Fort Mill’s first run.

Neither team would do anything until the fourth inning when Woodmont would score their only run. A Fort Mill error would put a runner on and then a single would score the run to tie the game.

Fort Mill only managed five hits in the game and Stegall said they would need more than that in the Upper State bracket.

“We are not 100 percent,” Stegall said. “We are not where we need to be. We were better teamwise tonight. We have got to get focused at the plate.”

Fort Mill will now host Dorman Friday in the first round of the Upper State bracket. Dorman beat Nation Ford in the District IV championship 2-0 ending the Falcons season.

Nation Ford managed just three hits in the game and finished the season at 11-13 overall. 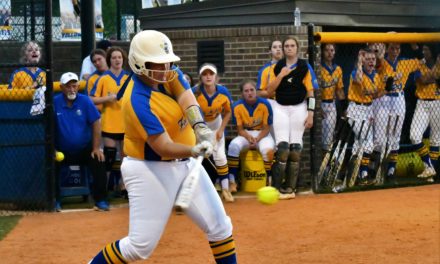