Dorman edges Falcons in overtime knocking them out of the playoffs

In the end it came down to taking advantage of an opportunity and the Dorman Cavaliers did so scoring in overtime to get a 1-0 win over the Nation Ford Falcons Saturday night in the third round of the 5A state playoffs.

Dorman converted a corner kick with about 5:15 left in the second 10-minute portion of overtime. The ball was kicked, bounced off a couple of people before Serge Nkoth would tap the ball in past the Falcons’ keeper on a header.

“We missed our opportunities,” said Nation Ford head coach Kenny Halas. “There was a lot of changing of momentum in the game. They didn’t have a lot of shots. We didn’t finish our moments. They did.”

Coming off a second-round win on penalty kicks earlier in the week, Nation Ford and Dorman was a game with two evenly matched teams that seemed to have been destined for another overtime for the Falcons.

The Falcons had chances early on in the game getting multiple shot opportunities in crashing the box, but struggled to find the goal in the opening 20 minutes.

Dorman also had their chances, but not nearly as many as Nation Ford. When the Cavaliers had possessions, they made the most of opening the pace up trying to attack the box.

Both teams had first half runs where it seemed they were going to score, but struggled with a crowded field.

The second half started as a back-and-forth battle of attrition between the two teams. Each team traded possession, but neither were able to really control the ball.

that the Dorman keeper was able to grab with ease.

Nation Ford had another good opportunity to score with less than two minutes on an indirect kick from the top of the box after a penalty on the Dorman keeper. That shot missed which eventually led to them going to overtime at the end of regulation.

Nation Ford ends their season with a 15-8-1 overall record.

The Nation Ford baseball team beat defending 5A state champion Hillcrest 2-1 on the road to eliminate them from the playoffs and punch their own ticket to the District championship at Blythewood Monday. Lane Ross pitched six and two-thirds innings allowing just four hits and a run, while striking out eight. Nation Ford score a run in the fifth and a run in the sixth inning and had six hits in the game. 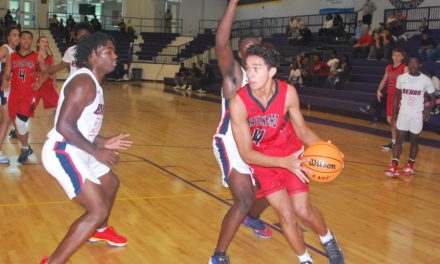