Fort Mill head baseball coach Travis Collier isn’t someone that shows his emotions too much publicly, but Wednesday night he did his best to fight back tears, but still they came.

Fort Mill beat the ninth ranked team in the country in the Blythewood Bengals 2-1 to win the 5A Upper State title and punch their ticket to the 5A state championship series where they will face Berkeley in the best of three series starting Saturday. Game one for Fort Mill is at home as the Jackets improved to 24-7 overall on the season.

“I can’t put into words what I feel right now,” Collier said. “I probably won’t sleep for the next two days. Those guys right there are special. That is a special group.”

Neither team produced a lot offensively as they combined for just five hits. Fort Mill managed just two hits in the game.

Blythewood started the game off got getting a run in the first inning with a couple of hits off starter Mathieu Curtis. Curtis hit the first batter of the game and a pinch runner for the Bengals would eventually come around to score after a couple singles.

Collier knew the first inning was going to be the hardest for Curtis.

“We knew we had to get out of the first,” he said. “We knew we could compete and we competed.”

The teams looked evenly matched early on, but Blythewood seemed to have a lot of confidence after scoring. The Bengals came into the game with an impressive 30-2 record on the season.

“We beat a very good team over there,” Collier said. “They are very good. We knew it was going to be a battle when they came in. I am very proud. I am a very proud coach.”

Fort Mill had a good chance to score in the bottom of the third as Zach Jennings eventually reached third after getting hit by a pitch, but was left stranded.

Things finally paid off for Fort Mill in the fourth as Eli Craddock walked and then was driven in by Carter Blankinship on a triple. Blankinship would score on an error throw to give Fort Mill a 2-1 lead.

After getting the lead, the confidence swung like a batter trying to hit an outside pitch. Fort Mill was able to hold off the Blythewood bats that had been so productive all season.

However, the Bengals didn’t go quietly as they led the top of the seventh off with a double. But as he had done most of the game, Curtis took a deep breath and got the next three outs, two by strikeouts to get the win for the Jackets.

Curtis pitched a complete game allowing just three hits and only one after the first inning.  He struck out eight and walked two.

For the Jackets, this is the first time they have made it back to the state championship series since 2012, when they were 3A. It has also been 20 years since Fort Mill last won a state title in the sport, when a younger Collier was part of that team as well.

“This is special for me,” he said. “One of the things I wanted to do when I got the job was bring a title back here, but this is all about them. This is an awesome experience.” 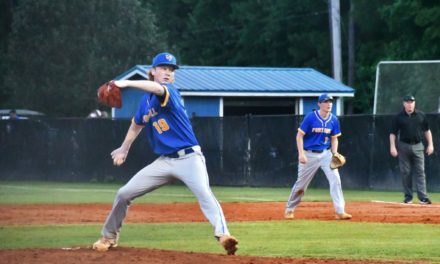