Despite four turnovers in the game, the Boiling Springs Bulldogs were able to come away with a 36-22 victory for their first win of the season and punch their ticket to the playoffs after beating Fort Mill at Bob Jones Stadium Friday night.

It sounded simple – win and you are in, but for both Boiling Springs and Fort Mill winning hasn’t been simple this year. Between the two of them, the teams were a combined 1-13 coming in to the game, and surprisingly one of them is now going to the 5A playoffs in two weeks. The Bulldogs now will face the winner of Region 4-5A in the first round – the Northwestern Trojans in Rock Hill in early November.

Fort Mill only dressed about 30 players again, about the same as they did last week at York. They were also without starting quarterback Kyle Neibch, who is out with two broken ribs. Junior Isaiah Haynes took over for the Jackets under center against the Bulldogs. He went 7-for-22 for 77 yards and two interceptions in the game.

About the start of the fourth quarter, Fort Mill recovered a second fumble from Boiling Springs with Landon Kurtz coming up with the ball for the Jackets. Fort Mill caused three fumbles in the game and an interception, but came away with only three points from the fumbles.

On the Bulldogs’ next series, they again fumbled the ball and again Fort Mill came away with it as Anthony Palermo gobbled the ball up for the Jackets. Fort Mill got the ball down to the four-yard line, but Haynes threw an interception. Boiling Springs capped things off with a 67-yard touchdown run with 1:40 left in the game on their next series making the most of the turnover.

Haynes was able to make the score a little bit better looking on seven-yard run with about 30 seconds left in the game.

At the start of the third quarter, Fort Mill’s Miller Shouse picked off a Bulldogs pass and got the ball to the Boiling Springs’ 10-yard line. On the next play, Michael Threatt ran in from the 10-yard line to get the Jackets in the end zone for the first time in the game. Boiling Springs blocked the extra point. Shouse and Threatt consisted of the majority of offense for the Jackets. Threatt ran the ball 19 times for 54 yards and Shouse ran the ball 10 times for 76 yards.

The excitement was short lived by Fort Mill as the Bulldogs again took advantage of a struggling Jackets’ defense and ran the ball right at them. That eventually resulted in a six-yard touchdown to put Boiling Springs up by 20 points with about five minutes left in the game.

Offensively in the third quarter, Fort Mill was able to move the ball better and put together a 70-yard drive resulting in an 18-yard touchdown pass from Haynes to JJ Ogwal to cut the Bulldogs lead in half at 29-16 at that point.

Boiling Springs scored in three plays on their first drive of the second quarter on an eight-yard run to extend their lead to 15-3 with about 10:15 left in the first half. Fort Mill put together a nice drive in the second quarter about midway through, but Haynes was intercepted in the end zone going for a touchdown to give the Bulldogs the ball back.

Offensively Fort Mill struggled to find a rhythm in the first half as they turned the ball over on downs on a couple occasions. After that second time, the Bulldogs sprinted down the field to score with 36 seconds left in the first half to put the game nearly out of reach for the Jackets.

Both teams kept the ball on the ground the majority of time in the first quarter. On the Bulldogs’ second drive, Fort Mill’s Harrison Noll recovered a fumble for the Jackets to give them the ball back in decent territory. Fort Mill was able to make the most of the turnover and ended up with a 38-yard field goal from Joe Schepler to get on the board.

The Jackets got the opening kickoff and was able to pick up a first down on their opening drive, but had to eventually punt. Boiling Springs was able to move the ball well on the ground and picked up yards at a steady pace. The Bulldogs were able to end the drive with a five-yard touchdown run and a two-point conversion with 5:18 left in the first quarter to crack the scoreboard first.

Fort Mill will trave to Gaffney next week to close out the 2021 football season. 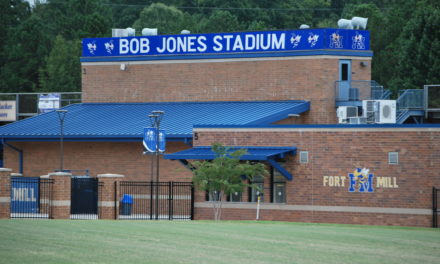