Dawson to run at College of Charleston

Dawson, 17, graduated from Fort Mill recently and will be running at College of Charleston in both track and cross-country. She had planned on just attending college at either University of South Carolina or UNC-Wilmington as a student. She hadn’t planned on running in college, but her former middle school and high school coach David Helms said he would reach out for her.

“I thought why not,” she said.

When she was contacted by Charleston, she decided to give running in college a try after they made her an offer.

“It was something I wanted to do, but didn’t think I would be able to,” Dawson said.

Dawson said she didn’t think she would be able to balance academics and athletics in college, but after already getting a semesters worth of college credits, she felt different.

“When I first considered it, I thought it would be too much to put on my plate,” she said.

Dawson will be running the two-mile events and longer distances if needed. She has been running since she was in the seventh grade and got into it after her brother took up running.

“I enjoy the team aspect of it because it gave me ways to make friends,” she said.

Dawson said she is grateful for Helms reaching out on her behalf to Charleston. Helms was not only her middle school track coach at Banks Trail, but also her high school coach for several years as well, before he went to Catawba Ridge to start their programs.

“It was really nice of him,” she said. “I have known him a long time and trust him.”

In high school, Dawson ran the 4×800, the mile and the two-mile events. She said she preferred track over cross-country, but said both sports have their advantages.

“Training for track is easier cause the work outs are less,” she said. “But I like cross-country because its just one race and you are done.”

Dawson will be majoring in public health. 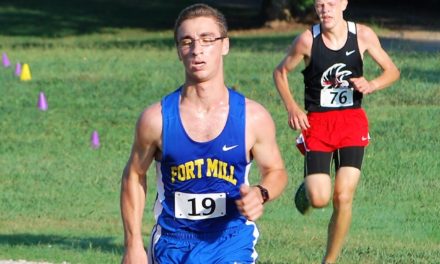